iPassport v3.5.6 is another small improvements release, adding a number of features across the application with particular focus on the Internal Audits area.

A new Frequency field has been added to the Internal Audit module. When the audit is completed this field can be used to automatically schedule the next occurrence of this audit. The audit is copied, with the copy scheduled to occur at the appropriate point in the future.

An optional verification step has been added to internal audits. This works in the same way as non compliance records, in that when the audit is closed the verifier will be sent a task asking them to review the audit and confirm that it can be closed. 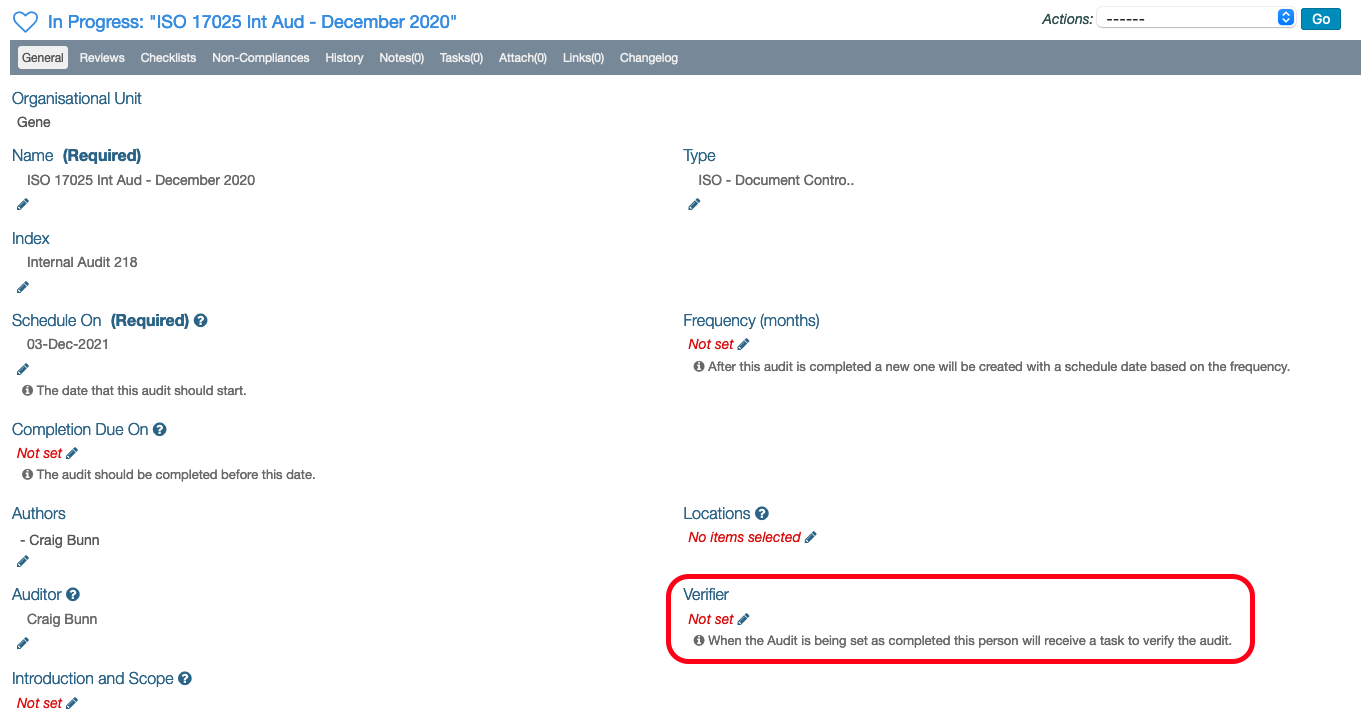 Users with permission to edit AND close internal audits now have the option to re-open completed audits. Previously this could only be done by contacting iPassport support.

A new OU preference has been added which allows control over whether audits can be closed if they have open non compliances. When set it will not be possible to close an audit until all associated non compliances have been closed out.

We have now added a tool to the non compliance record which clearly displays which audit and checklist step the NC was raised in.

If the Audit Step has any attachments or links these will be displayed here also in order to make it easy to see everything relating to this non compliance in one place, without having to flick back and forth.

It has always been possible to add attachments to a checklist step within an internal audit but iPassport content could only be linked at the top, audit level. This made things difficult if you wanted to link, say, a particular SOP as evidence when marking a checklist step as compliant.

It is now possible to link directly from the checklist step, making it easier to demonstrate evidence of compliance at a more granular level. 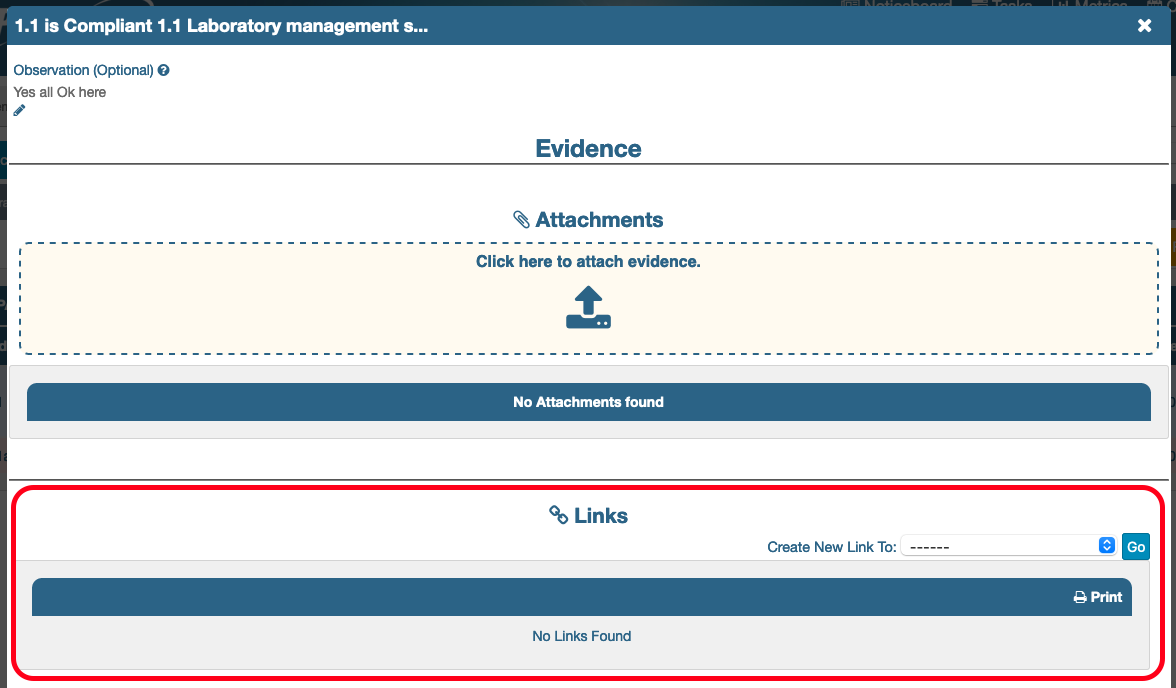 A few changes have been put in place which will hopefully make the lives of iPassport admins easier.

We’ve re-styled all changelog tabs across the application, meaning you don’t need to drill down into each line item to see the details of what changes were made.

iPassport provides a very powerful, granular permission structure, allowing a high degree of control over what users can and cannot do within the system. However, getting that high level view of which roles have which permissions can sometimes be a little tricky.

We have added a CSV export to the Administration / Roles area which allows admins to pull down a complete permissions / roles matrix for your account.

Many admins prefer their end users not to directly contact the iPassport support desk. To support this we previously added the option to choose where requests using iPassport’s internal ‘Contact iPassport Support’ feature are sent to. This defaults to the iPassport help desk email account ([email protected]) but can be changed in Administration / Settings / Account Preferences / Miscellaneous settings / Send Support Requests To. Changing this setting means nobody on the account can contact iPassport support and all requests are routed to a different person (typically the local iPassport admin).

We received requests from some accounts to allow certain limited key users to contact iPassport support but block this feature for most regular users. To facilitate this we have added a Can Contact Support option to the User record. This allows admins to switch off the Contact Support feature for individual users.

We also added a setting so you can specify the default value for this setting for new users added to your account going forwards. This can be found in Administration / Settings / Account Preferences / Miscellaneous settings / Allow new users to contact Genial Compliance iPassport Support by default 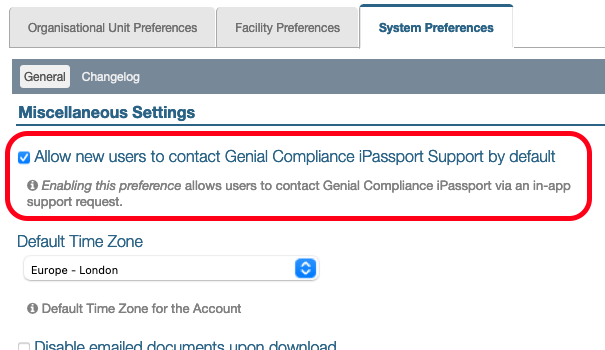 It is not possible to change this setting for groups of users en masse through the application but if you would like to disable Contact iPassport Support for a large number of users please drop us an email and we will be happy to help make those changes for you.

A new Distribution List Membership tool has been added to the Users General tab.

Fields have been made available in the cover page designer to allow the authoriser name, signature and date of authorisation of the three most recent authorisers to be added to the cover page. 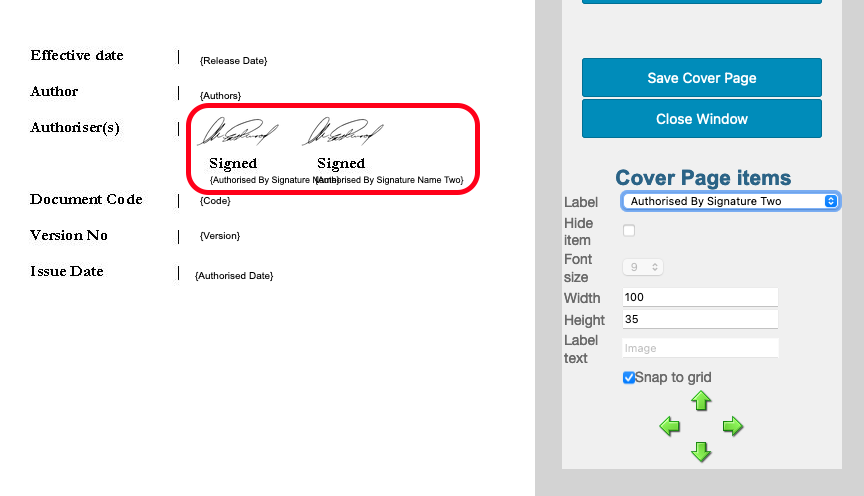 For full details on adding signatures to your cover pages please refer to the Cover Page user guide.

In addition, a new, optional authorisation sheet has been added to the controlled print appendix. This adds a page to the document appendix listing all authorisers, including their signatures where they have been uploaded. 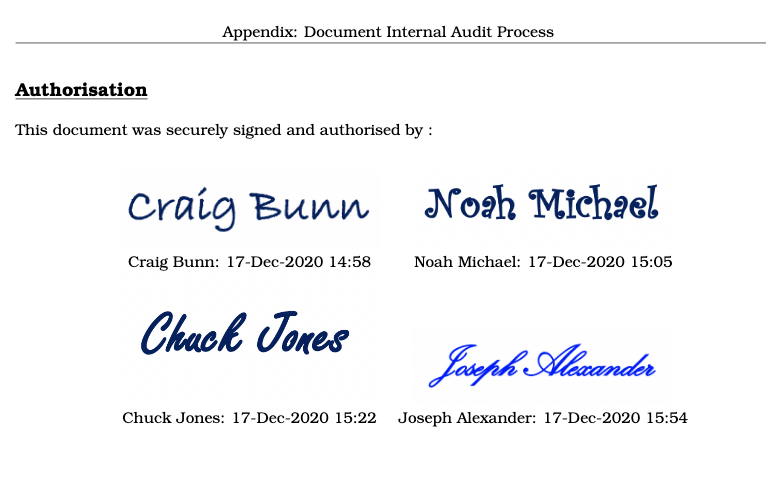 We have opened up the Standards Version Comparison tool, which was previously only available when importing a new version of an existing standard. This can be used to compare a standard set with its previous version at any point.

Open a standard set which has a previous version and choose Compare with Previous Version from and Actions drop down to see all differences between versions. 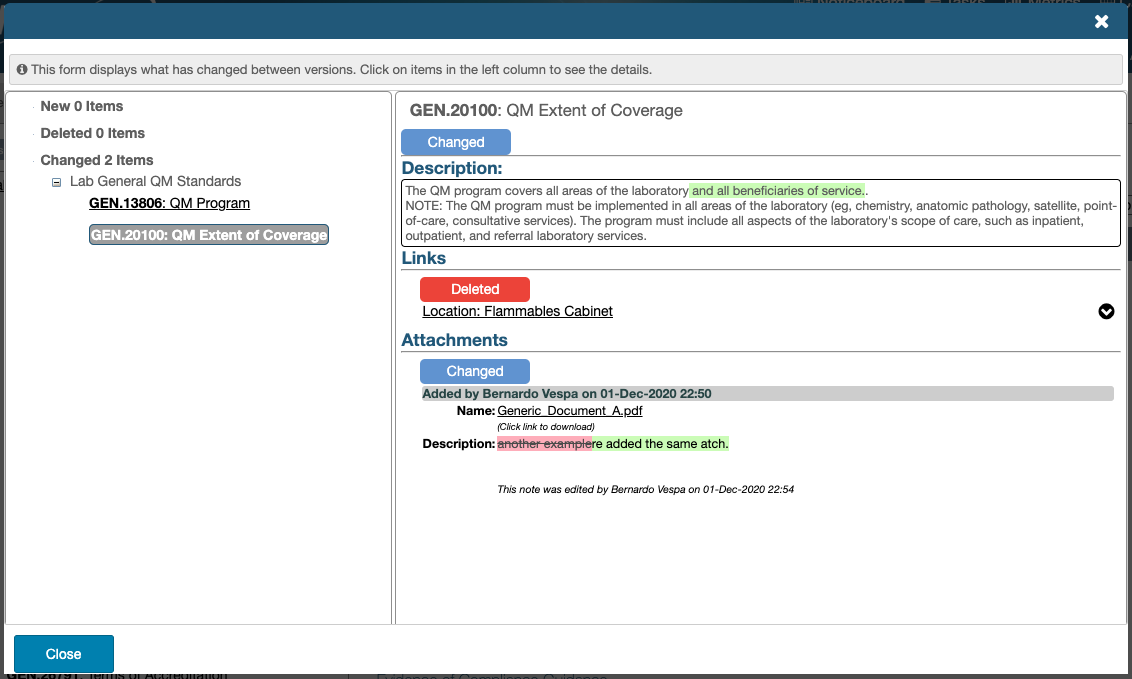 It is also now possible to control the order that Actions Statuses are listed in the non compliance actions drop down. These were previously listed alphabetically but ordering the options in a more logical way should make updating the action status a more natural process.

We have added a Reports To field to the staff records module. Fill in the staff member’s manager and iPassport will build an organisation chart. 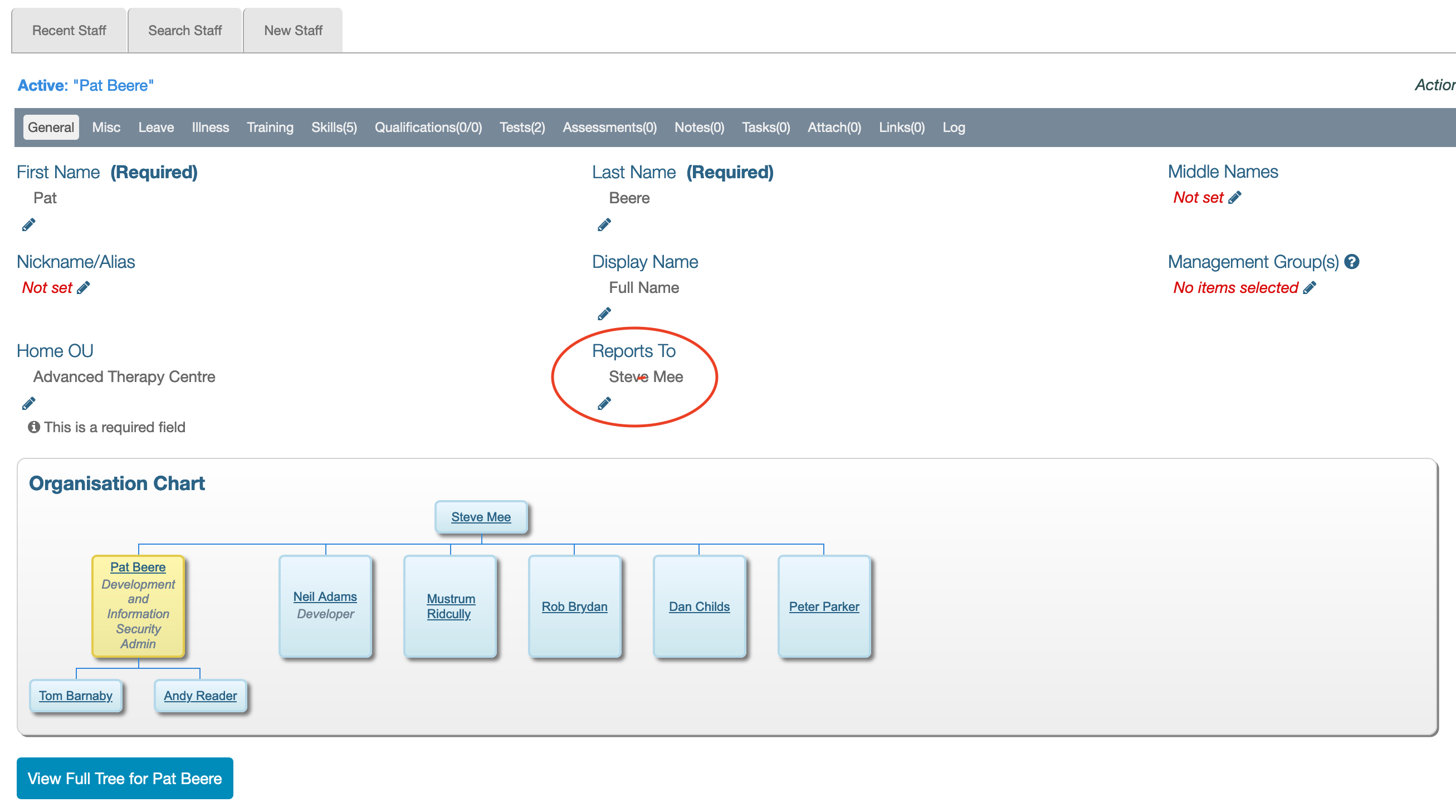 There is scope to expand the use of the Reports To field in the future. For example, it could be used for task escalation.

A search filter has been added to the Competency / Training Schedule area.

Users can now be added to a skilled group and marked as already skilled on all of the documents in the group. 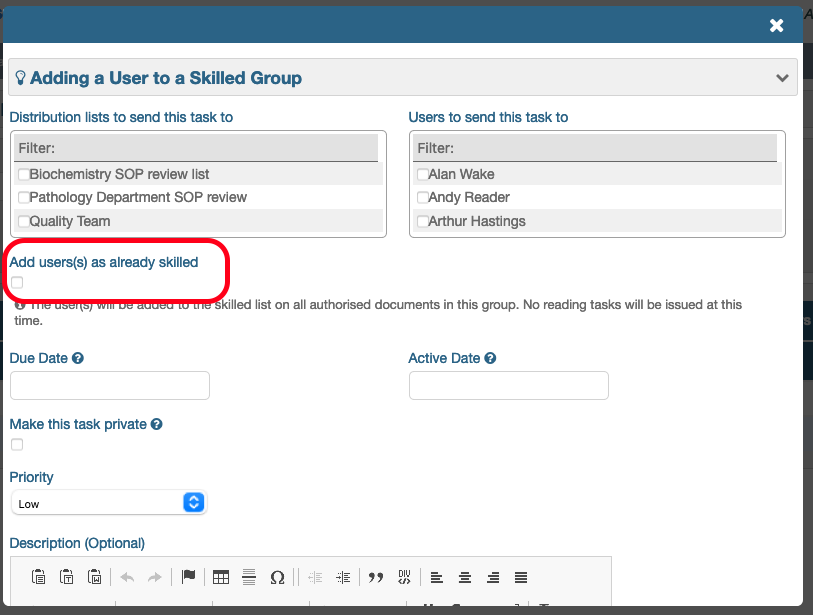 Rather than tasking the user to read all documents in the group the user will be added to the skilled list on all documents and marked as skilled without having to complete any tasks.

Restrict Lookup Data based on Facility or OU (IV-14719)

Visibility controls allow certain drop down values to only appear for content in specified Facilities or OUs. 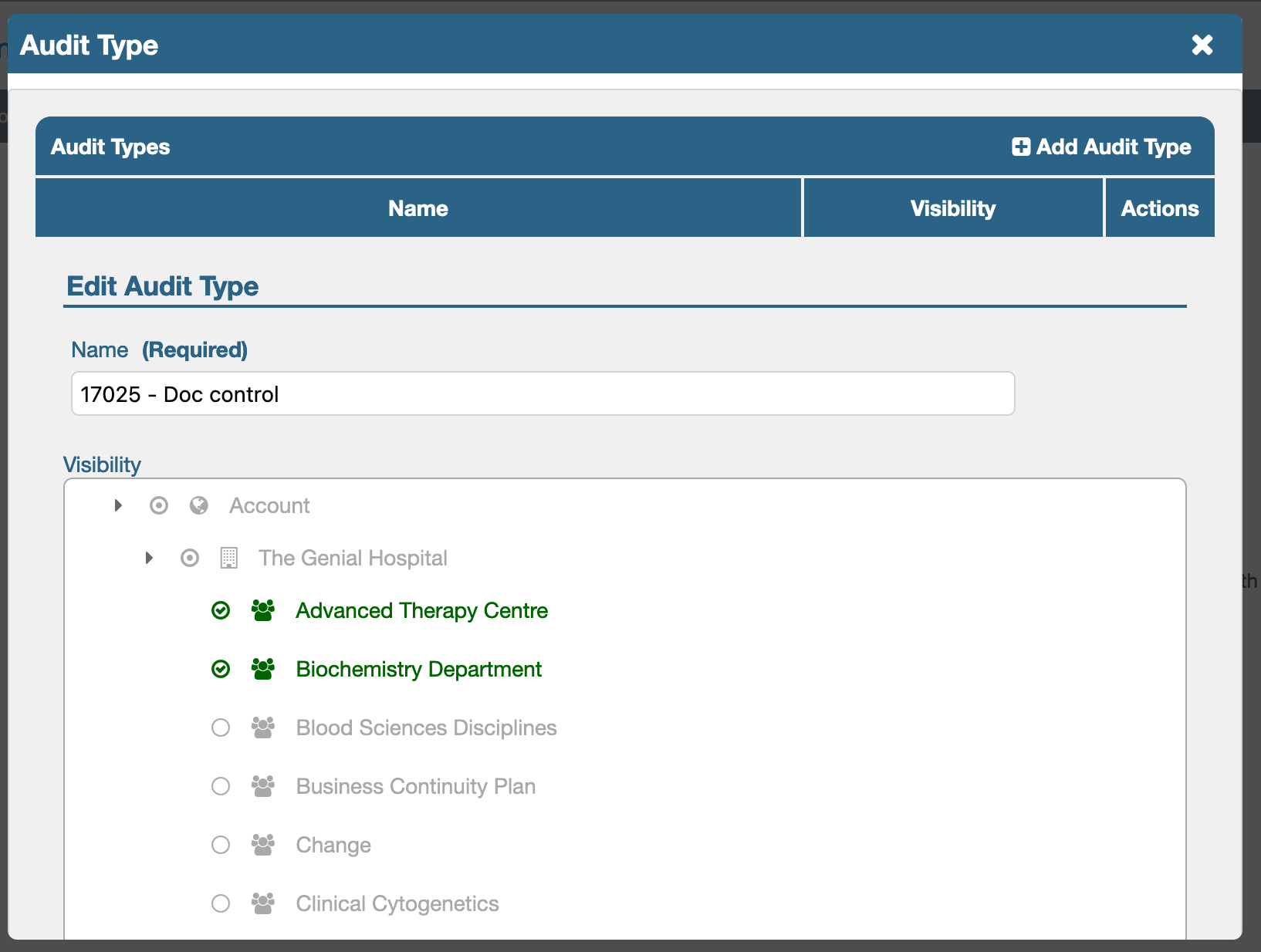 Visibility controls have been added to the following fields:

Limit fields based on Facility (Enterprise accounts only)

The following lookup fields have been restricted to only include lookup records from the same facility as the record being edited:

Validations documents are not included with minor releases. Full validation documentation for these new developments will be published when we launch the next major update of iPassport (v3.6.0).