The delayed release (Effective Date) option can be found within all controlled document types in iPassport and allows the user to authorise, or approve a controlled document and then release it formally on a separate date. Therefore, providing time for staff to read the latest version and sign off to say they have done so and be prepared for the official release.

The function is entirely optional and is on a document-by-document basis. If the effective date is left as the default (todays date) then the controlled document is released at the same time it is authorised.

The delayed release (Effective Date) tool is found within the normal authorisation area of the system and is controlled by the same permissions that govern authorising a controlled document.

Delaying the Release of a Controlled Document

The effective date tool can only be used at the time a document is authorised, as such it is found within the authorisation screen. 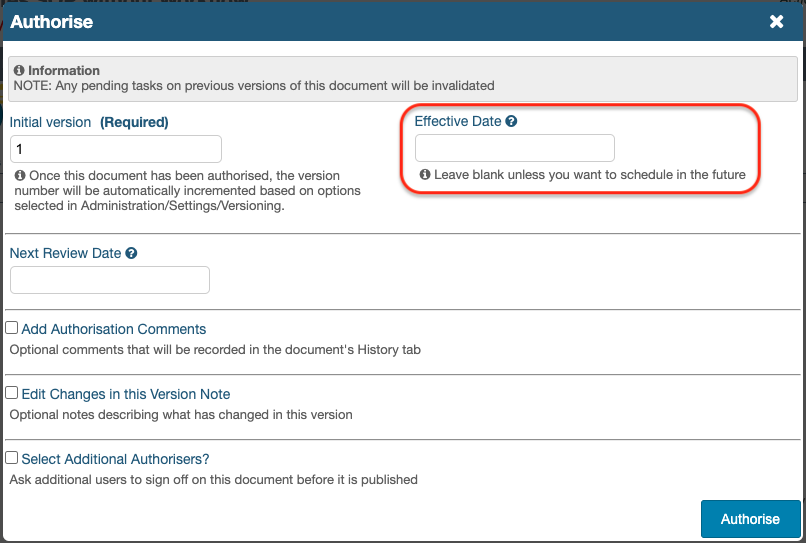 Complete the authorisation options as normal and select the date for this version to be released (effective from). If a different release date (effective date) is selected then this is displayed in the header of the newly authorised version.

If any skilled tasks are associated with the controlled document they will be released at this stage as these are tied to the authorisation date and not the release/ effective date.

The release date is recorded in the ‘History’ tab for the controlled document for reference, and can be found under the ‘Action: Authorised’ section.

Existing OU access permissions cover all delayed/ pending release documents, with the permission of ‘View Authorised… ‘covering access to them. They can be found within the normal Search area for controlled documents under the ‘Status’ of ‘Pending Release’.

Selecting the ‘Pending Release’ option displays all of those documents pending release. The search and be further adjusted if needed. As with all search results it is possible to export this using the ‘Export List’ option.

Once a document has been set up to be released on a specific date it is still possible to override this and release the document early, with this being accomplished via the drop down menu within the controlled document question.

Selecting the ‘Release Document’ option and clicking ‘Go’ the release option is displayed.

Adding the ‘Reason for releasing document’ and clicking ‘Release’, releases the document version immediately and supersedes the previous version at the same time. All early release functions are recorded within the ‘History’ tab of the controlled document.